Reactive CRDT: easy to use API to use Yjs and build collaborative apps

Hi all! A couple of weeks ago I’m got started with Yjs. I loved the project and its potential to develop local-first, distributed applications.

However, I noticed a bit of a steep learning curve at the beginning (“How do all these shared types work? How do I compose them?”). After getting the gist of it, wanted to see if I can build a really easy library to use Yjs.

The first version of Reactive CRDT is now live at https://github.com/yousefED/reactive-crdt. I really appreciate any feedback!

It works particularly easy with React, but it works great standalone as well.

Hope you’ll try it out!

A couple of notes, or things to think about:

I love the whole concept of reactive. I didn’t know that reactive allows to manipulate JSON directly. This is seriously awesome. Did you already publish a package? I want to create a new section in docs.yjs.dev for these kinds of projects. Maybe it would even make sense to link to this in the tutorial section.

Thanks for creating it!

You’re welcome! Would be great to be featured!

Regarding “reactive” vs. “reactive-crdt”. “reactive” is a separate library I wrote (mostly as a basis for “reactive-crdt”). It’s similar to MobX, NX Observe, or Vue3’s “reactive” function. It brings Functional Reactive Programming (FRP) to Javascript: simply put; the concept of automatic observable values and observers / reactions, instead of having to deal with events all over the place.

“reactive-crdt” is the easy-to-use API for Yjs. It can be used with either “reactive”, MobX, or Vue3 reactive (technically, it could also be used without any FRP library, but it would make it difficult to observe changes). The demo in the readme uses the “reactive” package as it has the simplest API. Pretty much all “reactive-crdt” is exposed in just the crdt function!

However an array that is nested in a map, each client will initially create its own new Y.Array() and insert it into the map, and essentially one of these arrays will be discarded on sync.

Or another example I’ve found is having a primitive value in the json, e.g. a number 0, if the document gets updated to have that field as a 1, when a new client connects it can reset that value to the initial value of 0.

Did you figure out a way around this? or am I overthinking a non-problem (e.g. is it really that hard to ensure some sort of ‘sync’ event before initialising)?

Regarding the initial values: that’s not solved in this library. I think it’s better to discuss that in this thread. The topic has come up quite a bit lately, so it would be good to collect feedback and thoughts there.

Looking at the api around the vue support I do have a few preferences/suggestions, which are coincidentally how our apis differ…

That example of using the data field in define component does a great job at highlighting how simple it can be to use for people familiar with vue so A+ on that.

I went a quite different route with my api since in vue3 the reactivity logic is actually separated out from the component framework completely, and I want to use this in environments not supported by the vue framework such as worker threads.

its along the lines of

Then you can use syncedFruits as a regular vue reactive object where needed.

I don’t really think this is the neatest api, but it provides me with a lot of flexibility. As I said I can use this in worker threads, and as
dmonad asked earlier, for instance, if I want to have an xmlFragment in the object it can be this:

here markRaw and reactive are both from vue’s own reactivity library. markRaw basically tells vue reactive to not react to internal changes of the xmlFragment.

Thanks for the feedback @alexbakerdev!

reactive-crdt should integrate nicely with vue’s “reactive” (it’s also what the data-example uses under the hood) and accommodate your use-case. Let me know (maybe on github) if I can make this clearer in the docs.

The reactive-crdt version of your first example would be:

Now you can do with lists.fruits whatever you want. Nested values are also automatically transformed, so { name: 'Apple', weight: 2 } is a YMap internally.

Your second example would be:

With reactive-crdt, your application should actually respond to text / xml changes, so you don’t have to call .observe manually.

Hey @YousefED thanks a lot for creating this library, i was wondering what is the solution for Vue2, for now I’m using the without any framework option.

I would greatly appreciate any guidance you could provide.

Hi and welcome to the forums!

Unfortunately, there are no plans to support Vue 2. In Vue 3, the “reactivity” system of Vue has been rewritten, and this is what reactive-crdt relies on. I have not explored Vue 2 enough in-depth to estimate the work required for an integration.

Of course, you can use the “plain” reactive-CRDT library as is

How has your experience been so far?

Can you try the combination of rxjs and YJS, I think

@YousefED Very cool! Thank you for creating and releasing this library.

I’m working on an application for which I think I would like to use Yjs subdocuments, and I’m curious if you have ideas about subdoc support in this reactive-crdt library?

I’m interested in subdocs because I want to have multiple awarenesses throughout the doc; mostly for having many text types mounted across the doc, but for a few other awarenesses, too, and my understanding is that there’s a “1 awareness per doc” model. 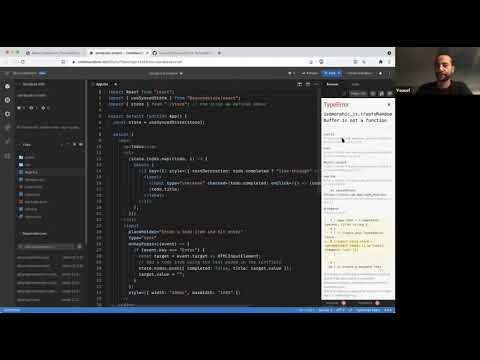 my understanding is that there’s a “1 awareness per doc” model.

Actually, Yjs and Awareness are simply two independent CRDTs that you can use alongside each other.

@dmonad Thanks! I’ve spent a lot more time reading and experimenting with Yjs this week and now understand my original question was a bit misguided. I’m now thinking about a single-doc approach, and thinking more about how multiple awareness consumers (mouse X/Y, tree/block presence like Notion, text edit cursors, etc.) can share the awareness keyspace. I’m thinking about multiple instances of the same editor within a doc here Multiple text types per doc + multiple editors in the UI · Discussion #310 · BitPhinix/slate-yjs · GitHub but really this could generalize to some lightweight standard where various libraries who participate in the awareness CRDT agree on how to share the keyspace safely. Sorry, I’m digressing a bit from this SyncedStore thread. Also, perhaps this is very much an application-level concern rather than a library concern… I think if libraries expose a way for the application to provide some sort of awarenessRootKey then the responsibility of structuring the awareness crdt can rest wholly with the application.

This is indeed very exciting. When I was first evaluating Yjs for the shared data model for a React application, I wondered if there was some kind of proxy library which wrapped the Yjs API in a mutable API, like Immer.js – SyncedStore looks wonderful!

I had recently been working on a library for a large React/Redux application which syncs a stream of Redux actions over client/server websockets and solved some interesting problems around optimistic updates, resolving conflicts, etc. But I am quite tempted to move to a Yjs/SyncedStore approach instead.

Thanks for sharing the Y Community video about SyncedStore. I noted a few questions or comments for @YousefED while watching and thought I would share:

Thanks again for sharing!

Hope this helps! If you have more questions it might be easier to create separate topics to keep this thread organized btw